For more information regarding COVID-19, visit the Department of Health’s information page

Beauty and confidence have no age-- and these 3 inspiring, radiant women prove that age 50 is a moment to embrace new challenges, and look to the future with serenity, joy and grace.

In a culture that worships youth, especially in women, it's important to re-affirm the axiom that true beauty has no age. Shining stars in fields as diverse as genetic science, entertainment and humanitarian aid, these 3 inspiring and radiant women prove that age 50 can be a time for profound creativity, power, confidence and joy. A time for taking on new challenges and going beyond your limitations to create exactly the life you want.

Best known for her current role as the elegant and powerful Claire Underwood in Netflix series House of Cards, Golden Globe-winning American actress Robin Wright dominates the screen with her subtly glamorous, self-possessed style. Her distinctive charisma and raw talent have earned her accolades: she’s the only actress to date to win a Golden Globe for a web-only TV series.

Her motto: “I’d rather attempt something I’m not sure I can do.”

You may have never heard of University of California, Berkeley Professor Jennifer Doudna—but the world of genetic medicine certainly has. In 2012, Doudna and her colleagues discovered a revolutionary, more efficient way to edit DNA, which has lead to many other breakthroughs in the field. She has won numerous awards in science and medicine, including from the Institute of Medicine in 2010.

Her motto: “One of the problems in the biotech world is the lack of women in leadership roles, and I'd like to see that change by walking the walk.”

When the deadly Ebola virus reached epidemic levels in several West African countries in 2014, Doctors Without Borders President Joanne Liu showed incredible courage and determination in fighting it—and saved countless lives in the process.  Although Ebola is no longer making daily headlines, the Canadian doctor continues to combat the virus in affected countries including Sierra Leone and Guinea, telling Time magazine “Although we still have some way to go, today we collectively have the means to bring the epidemic to an end”. A true icon of calm, grit and grace in the face of enormous challenges.

Her motto: “Our humanitarian aid system is sick and needs to be fixed. It needs to get a reality check and get back [its] humanity.” 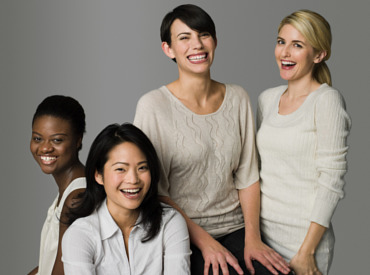